I had intended to post much more regularly, but the wifi problem in the marina has not yet been resolved so we still have to go to the customer lounge to get an internet connection. This is very frustrating as everything else about the marina here at Maryport is brilliant.
However, there is now a Christmas tree in the customer lounge, which is making me feel really Christmassy, so much so that I've already put up a small fibre optic Christmas tree on Ravensdale, much earlier than I would have put up any decorations in previous years. Must dig out the rest of the decorations and get them up asap. ﻿﻿ Anyway, we're settling in well. The boat already feels like home and Dex seems more at home here than he ever was in our house in Corpach.
He is getting much better on the lead, especially when meeting people and other dogs, and loves running on the beach and playing in the sea.
Dex is also very relaxed on board. Even the rocking caused by high winds and the sea swell doesn’t seem to bother him at all so I guess he’s becoming a real “sea dog” now :-)
I enjoy the rocking motion too, especially while we were watching an old naval war film the other day. It was rather like watching TV in 4D :-)
It’s also very comforting being rocked to sleep in a nice, warm bed while listening to the weather raging outside.
A new electric blanket and a good heating system mean we are every bit as warm here as in any of the houses we have owned – and a lot warmer than in some of them!﻿
On the whole, the weather has been fabulous since we moved in just over a month ago – wall-to-wall sunshine and some really beautiful sunsets. 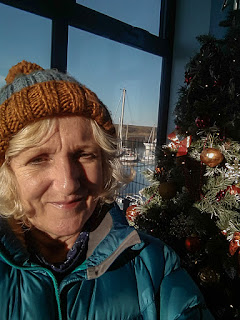 However, it’s been pretty cold at times. The coldest temperature we’ve recorded so far was -6C one morning last week.
Until the last couple of days, we had a few windy days, but it has been mostly dry and sunny, with only the odd wet day – very different to what we were used to in Fort William.
However, we’ve had a bit of rain this week, but I now have a new jacket from the Maiden Marine chandlery at Whitehaven Marina that keeps me dry and cosy so I’m still happy doing things on the boat and taking Dex out for walks whatever the weather – it certainly beats working for a living :-)
And it's beginning to feel a lot like Christmas...

Sue Restan
My husband, Phil, and I sold our house and bought a boat in October 2016 and have been living on board ever since. We're currently based at Maryport in Cumbria, UK.